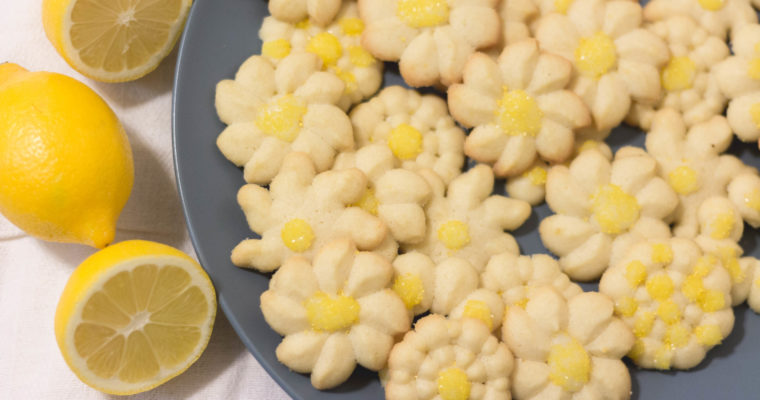 I recently got a spritz cookie press for my birthday and have been making batch after batch of spritz cookies. I started out with the original recipe that includes almond extract, then went for a straight butter cookie type recipe and have since been venturing […] 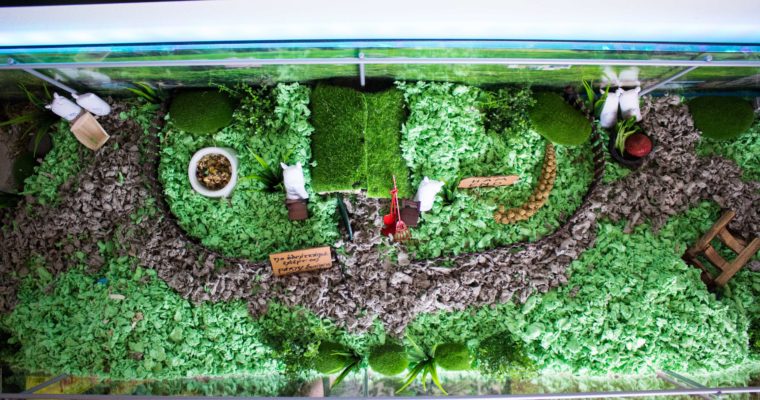 I have been a Lord of the Rings fan since I was a kid. I was obsessed with the movies and books growing up and have always had some sort of Lord of the Rings paraphernalia in my home. When I got my hamster I […] 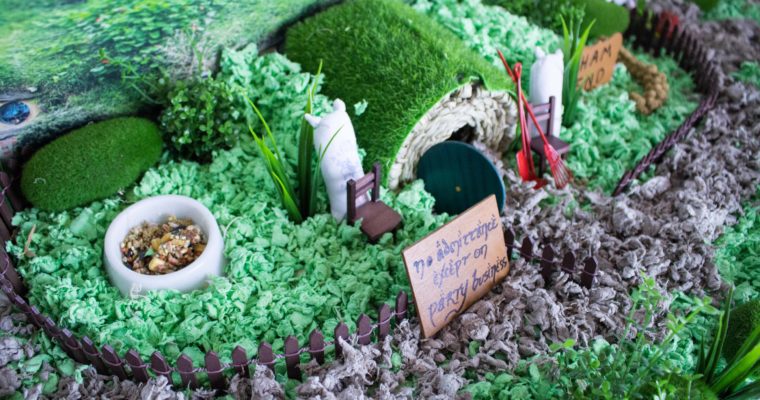 For the new Lord of the Rings inspired Shire Cage that I created for my hamster I had to build and create quite a few things myself, including this hobbit hole hamster hideout. The hideout and accompanying doors and signs took me about a […] 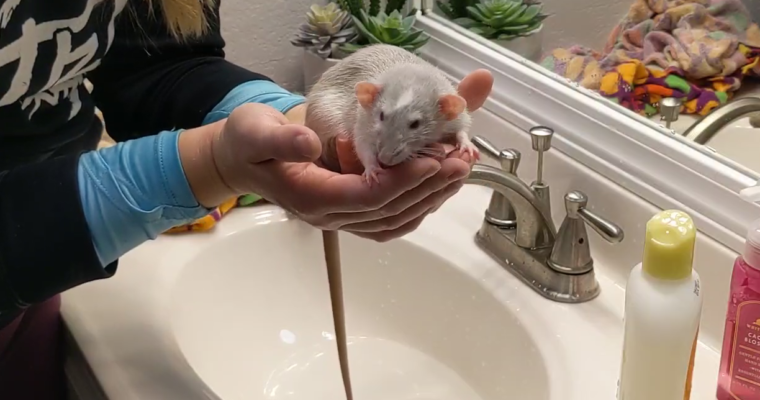 How I bathe my 5 pet rats! Rats Names from beginning to end: Toph, Sadie, Kaylee, Mal and Gin. Mal and Gin are 3 month old neutered males. Toph, Sadie and Kaylee are all females and a little over a year old. Kaylee is the […] 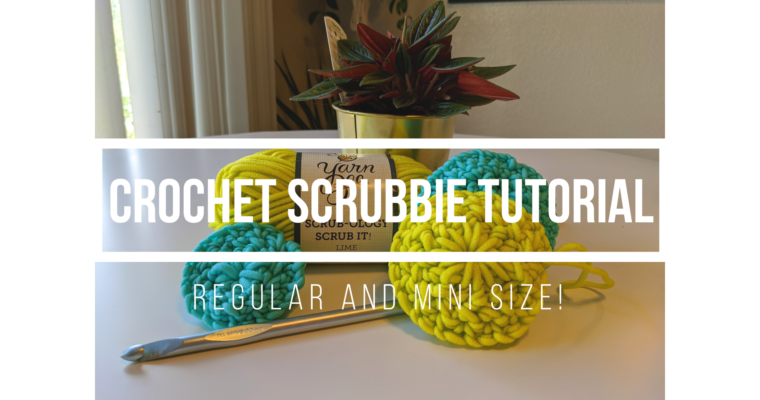 Learn how to make kitchen and bathroom scrubbies using the Scrub-ology yarn from Hobby Lobby with this tutorial. These are perfect for washing dishes or in the shower. The mini size works great as a facial scrubber and is the perfect size for gift giving. […] 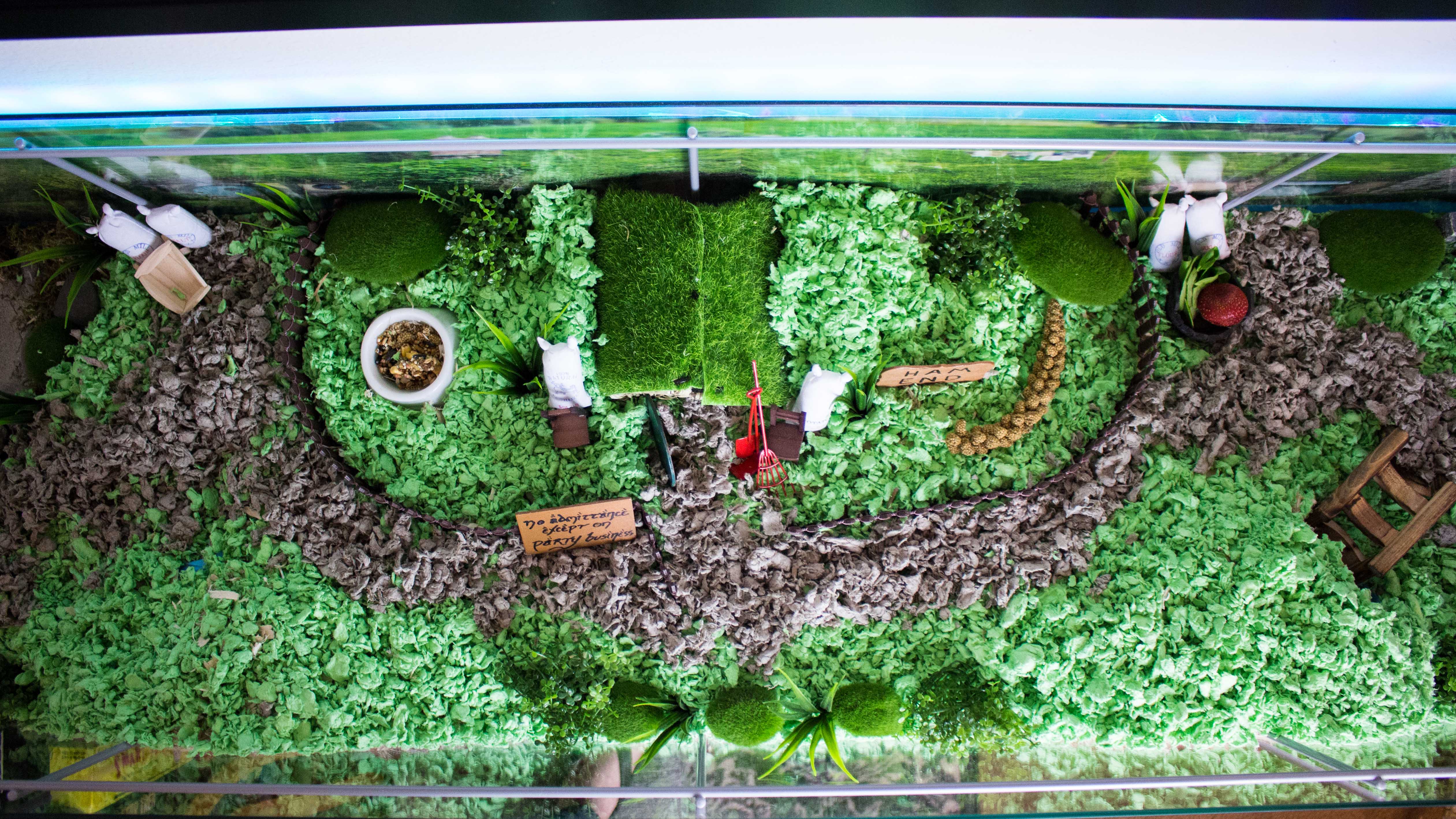 I have been a Lord of the Rings fan since I was a kid. I was obsessed with the movies and books growing up and have always had some sort of Lord of the Rings paraphernalia in my home. When I got my hamster I named him Samwise Hamgee after Samwise Gamgee and had immediate plans of creating him a fabulous Lord of the Rings inspired Shire cage. It took me a few months to get the necessary materials for the cage, but I was finally able to create this amazing cage and he absolutely loves it. 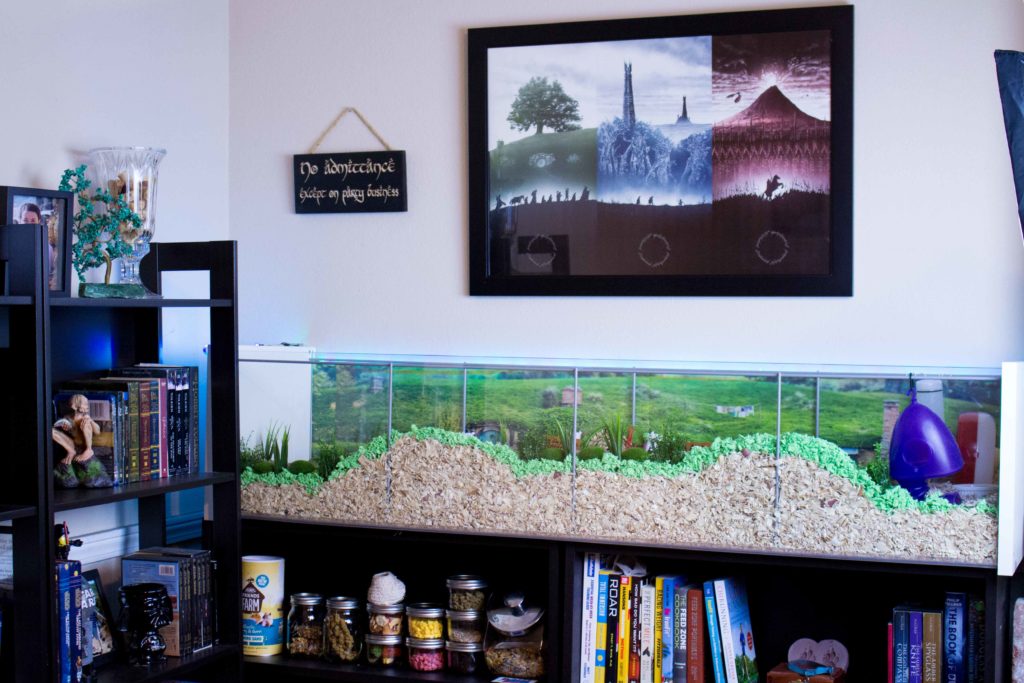 Here is a list of everything that I used in this cage with links to where you can find it: 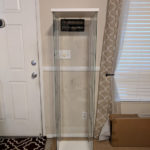 The cage itself is an Ikea Detolf display case. The case costs about 60 dollars at Ikea and is super easy to put together. After it’s set up you end up with about 950 square inches of space for your hamster to live in. The minimum cage size for a hamster is 450 square inches, so this enclosure provides more than enough space, especially for my tiny dwarf hamster.

To use the detolf as a hamster cage, simply keep the door and glass shelves off during construction. Because Samwise is a dwarf hamster, I do not need a top to the cage. He cannot climb out of the cage, I double and triple checked to make sure he wouldn’t climb out and accidentally hurt himself. If you have a Syrian or a good climber, you may want to make a cover for your detolf. I’ve seen a lot of people make simple wood braces, cover them with wire mesh and fit them to the top of the detolf to keep their hamsters safe. 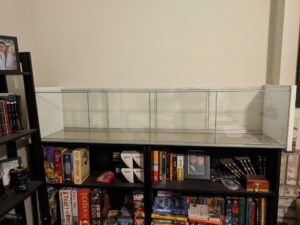 For the background, I searched the web for a good quality picture of Hobbiton in New Zealand and got a large print of it made up at Costco. I have it taped to the back to give the cage depth and add a bit of interest. I feel like it really pulls the cage together too. Directly behind the photo backing, I have a long line of RGB LED lights strung up. The lights aren’t really necessary for Samwise, but they look really cool when lit up. I only turn them on when I am in the living room where I keep his cage, because as a nocturnal hamster, he doesn’t really need the extra light. 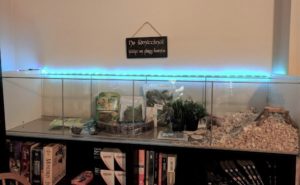 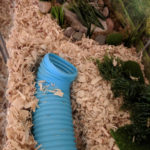 After getting the cage set up I dumped in a ton of Aspen bedding as his base bedding. The bedding ranges from 4-6 inches in soft rolling hills throughout the cage. The front part of the cage is the highest in terms of bedding and that is because I have a 3 foot long tunnel in the front that he uses as his main hideout. The tunnel has two entrances that I made look like little hobbit entrances. One entrance is plain with just a carefresh covering and the other has a little bridge going into the entrance. That is the main entrance he uses, probably because it is located right next to his food, water and wheel.

On the far right side of his cage, I kept an area clear of bedding to make him a sand pond. To create the pond, I cut a large heavy duty black plastic garbage bag to use as a liner, similar to the way a real outdoor pond is made. The liner was set into the corner of the cage and chinchilla sand was poured on top of it. 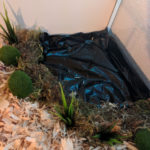 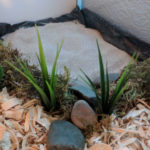 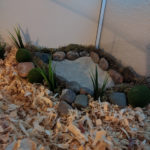 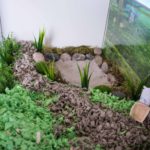 After pouring the sand in, I lined the edges with terrarium moss and smooth river rocks from my garden to keep the liner down. The edges of the pond are lined with some faux moss covered rocks that I purchased on Amazon and deconstructed pieces of a fake plant that I purchased at Ikea. I made sure to test these items before using them in his cage. I wanted to make sure Samwise wouldn’t chew them and possibly make himself sick, but he has shown no interest in the fake plants other than the occasional sniff. He does love the fake moss balls. He won’t chew them, but I wake up every morning to the balls spread out all over the cage. I assume he has some sort of hammie game moving the balls here and there throughout the night.

After finishing I set up the rest of his plants and throughout the rest of his cage. Most are placed along the edges of the cage to provide interesting details. On the backside I was careful to place the plants in spots that wouldn’t hide the hobbit homes that are on my background. 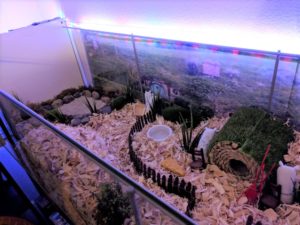 In the center of his cage I have a handmade Hobbit home complete with signs and door. To see how I made the house and door click here. His house is covered with faux grass and fitted with a removable fake hobbit door.

Surrounding the house I have a long faux wooden fence that was meant for a fairy garden. I cut the fence up into three sections. Two long sections for the main part and one small section to act as a fake gate that I keep open.

One one side of his “front yard,” I keep a small food dish filled with hard chewable treats and on the other side I keep a spray of millet seed. He loves chewing up the little seeds on the millet spray. 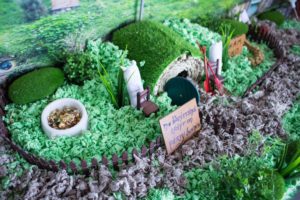 As far as decor that really serves no purpose other than it’s cute, in front of his door I have a few fake dry goods bags, one says potato (any fan of the movies, will know why I thought this was fitting for Samwise) and the other flour. I have a few more of the bags in front of the two other background houses in his cage as well. I also got a couple of wooden fairy garden chairs, some gardening tools (because Samwise is a gardener) and a wheelbarrow. 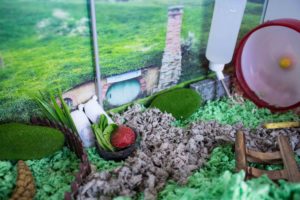 Going onto the far right side of his cage, I have his main hammie supply section. Here I keep his wheel, a large sized silent spinner, his water bottle, his food dish, a few chew toys, a purple hideout (which admittedly isn’t very hobbit like, but he really loves it, so I decided to keep it in his new cage) and a small faux wood barrel that I keep filled with fresh foods like berries and greens. 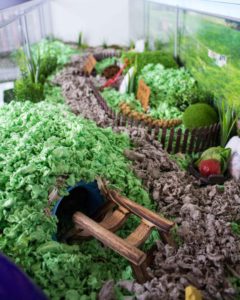 To finish off his cage, I used two types of bedding in addition to some soft nesting material that I placed inside his tunnel. The nesting material I use is from a brand called All Living Things and comes in compressed square blocks. He loves ripping up the blocks and fluffing up the material to make his nests. I used green carefresh to simulate the grass of the shire and brown carefresh to make a little walkway that connects all of his houses, even the fake background houses with his pond and his food, water and wheel. 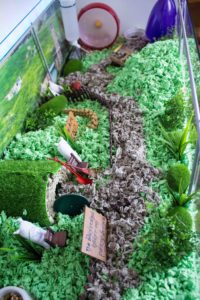 This took me a few weeks worth of work here and there to get it totally put together, but that was mostly because I didn’t have a plan in my head as to what exactly I was going to make and I ended up having to order and go to multiple stores to get all of the supplies I needed for his enclosure. Let me know what you think of his Lord of the Rings inspired Shire Hamster enclosure in the comments below and be sure to check out the video at the top of this page for a full in depth view of his cage.

For the new Lord of the Rings inspired Shire Cage that I created for my hamster I had to build and create quite a few things myself, including this hobbit hole hamster hideout. The hideout and accompanying doors and signs took me about a […]

I recently got a spritz cookie press for my birthday and have been making batch after batch of spritz cookies. I started out with the original recipe that includes almond extract, then went for a straight butter cookie type recipe and have since been venturing […] 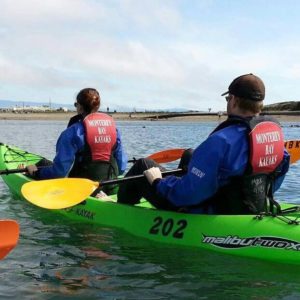 Welcome to Hobby Vida! This blog is run by husband and wife couple Lindsey and Chris. Lindsey also runs a blog called LindzTris and is an active triathlete.